Amiibo work by randomly selecting moves. By emphasizing effective moves and punishing ineffective moves, we influence the probability distributions of which moves are chosen. As said in The Hunger Games the phrase “May the odds be ever in your favor” is aptly applicable to Amiibo. We can’t make a perfect Amiibo but we can push the odds as far in our favor as possible.

An Amiibo’s behavior is defined by two parts: move set and personality. When asked about personalities, the immediate responses are often “personality doesn’t matter” or “you can win with any personality.” The reasoning: how ever you train an Amiibo a suitable personality will follow. This is a very pragmatic approach. But what about an empirical approach?

The question remains is this really the best way to find a personality? Or is it a local maximum? There are several personalities that are hard to get without spirits so they are rarely seen. Could we push the odds 10% (or even 1%) in our favor by choosing a different personality?

To better understand how personalities work, I devised the following experiment. It’s designed to limit as many variables as possible.

You’ll notice I only created 8 Amiibo instead of 24 or 25. This is due to two things. First, without an Amiibots-like automated setup, running lots of matches is not reasonable. Having 24 Amiibo play each other would result in 276 matches. Using 8 only requires 28 matches, roughly a 90% reduction.

Second, the personalities are related. This flowchart from ArklaineGenesis shows how spirits can be used to change to different personalities. 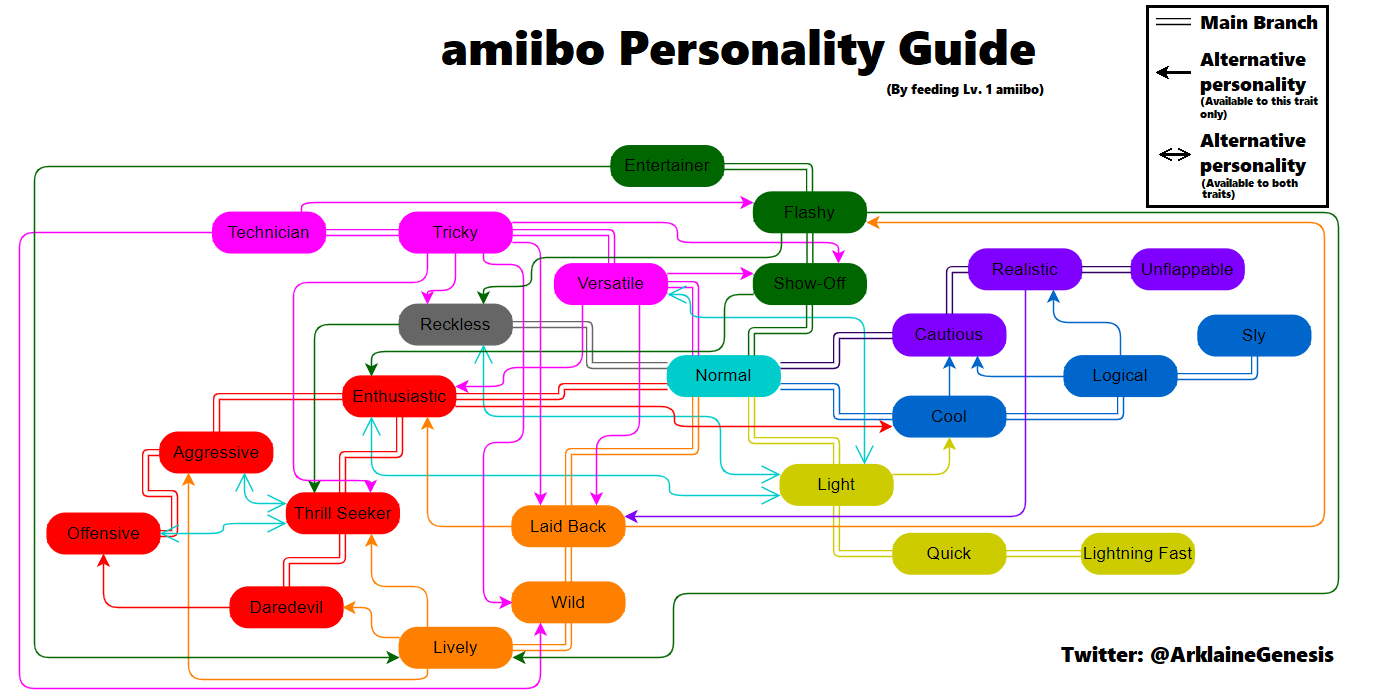 It’s simple to confirm these branches. If you start with a fresh Amiibo, look for a spirit that moves it from Normal to the first stage of a branch. If you give the Amiibo three of these spirits total, you should end up with the final stage of the branch.

For this experiment I chose the 8 final stage personalities:

These personalities should be the most distinct.

As for the character, I chose Link for several reasons:

There are some caveats with this experiment.

Enough about the procedure. Let’s look at the results.

For each match I recorded wins/loses, KOs/falls, and damage given/received. From that I derived several key metrics.

The full data set is here.

How many first-to-five matches the personality won.

Damage Given Per Game

Damage Given Per KO

Average damage a personality did to get kill. Lower is better. This metric may be more important than damager per game. This means a personality can get kills sooner.

Average damage before dying. Higher is better. Shows how long a personality can survive.

Average number of kills per game. For a three-stock game, closer to 3 is best.

Number of kills per own death. Greater than 1 is good.

The Offensive personality is a clear winner with Lightning Fast in a close second. Offensive is top is every metric except one. Lightning Fast was able to kill at a slightly lower damage on average.

Sly only won a single game. It played too safely and just wasn’t able to get reliable kills. These personalities show the best defense is a good offense.

This research would not have been possible without all the modders out there, especially fudgepop01. Thank you for your contributions to the Amiibo community.